Back to all articles
Blog

Brick and mortar stores are considered old-fashioned and many customers are turning to online platforms to make their grocery shopping. However, there are still powerful and innovative brands that know how to attract customers in stores and engage with them. Ferrero is one of those brands!

Ferrero wanted to have a unique in-store brand activation campaign for Kinder CéréAlé and that’s why the brand decided to use the best shelf robot, Tokinomo. With the help of light, sound, and motion technology, Tokinomo managed to bring Kinder CéréAlé to life. The product talked and moved off the shelves of Hyper U Les Arcs in France.

Lineaires, the magazine of food distribution, writes: “Breakfast cookies can also count on Ferrero with Kinder CereAlé. Launched at the start of the year, the range has almost been fully distributed and enjoys massive support with a TV spot broadcast since the beginning of April as well as good visibility on the shelves. In addition to the usual highlights, Ferrero has installed in 80 stores a system called Tokinomo, which allows a product to be mechanically pushed out of the shelf and then returned, accompanied by lighting and a sound message presenting the recipe and its use.”

Kinder had a catchy message that stated: “Hey! Waking up has never been so good! It's me, Kinder CéréAlé, the new Kinder cookie so crunchy, so delicious, with tasty pieces of hazelnut or gourmet dark chocolate chips."

Ferrero was able to use Tokinomo’s shelf robot because of the France distributor Optimark. Since July 2020, Optimark has implemented various in-store marketing campaigns with Tokinomo.

Gabriel Gonnet, Optimark’s director of commercial development stated: “To date, Tokinomo's greatest successes in France concern Ferrero, Le Chat, and Président. In some cases, the product has recorded more than 150% increase in sales - while the average increase is around 20% with classic POS displays!"

From the shelves to social media

Kinder’s campaign wasn’t just an in-store success! It actually ended up going viral on Twitter and LinkedIn as well. What more can you ask from a brand activation in-store?

Intrigued by this new, innovative robotic POP display, Je Bosse en Grande Distribution posted a short clip from Kinder’s instore brand activation on Twitter and LinkedIn. This clip was retweeted almost 4000 times and received over 500 comments in the first two days. LinkedIn users were also amazed by the clip and that’s why there are over 59.744 views on Je Bosse en Grande Distribution’s post.

Most people were amazed by Tokinomo and congratulated Ferrero for Kinder’s in-store marketing campaign. Also, people who work for Ferrero were happy to see how Kinder’s campaign was implemented with an award-winning product, Tokinomo. 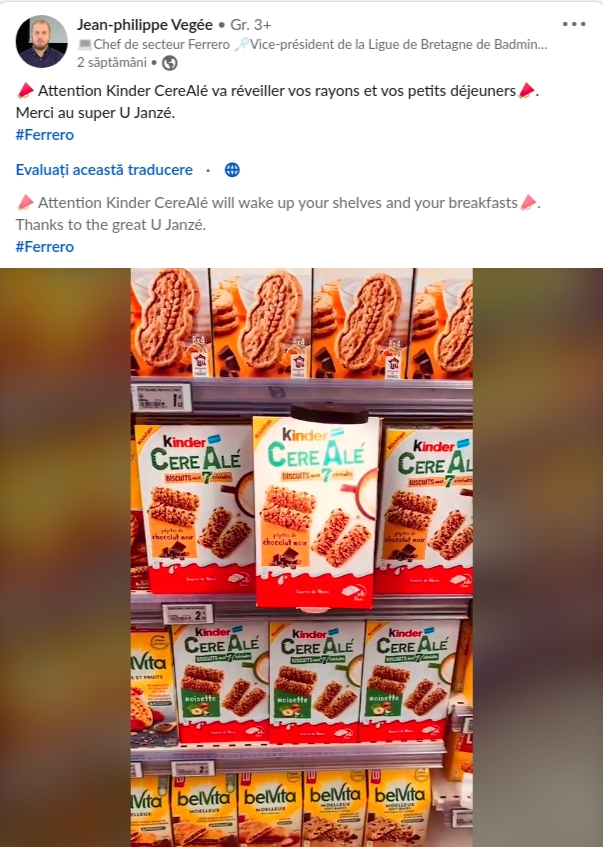 From social media to online press

The in-store marketing campaign for Kinder is still creating buzz all over the Internet. Apart from going viral and receiving great comments from social media users, Kinder’s campaign has also reached the online press. Some French publications, including 20minutes France, wrote all about Kinder’s campaign implemented with Tokinomo.

This journey, from the store to social media to the online news websites shows that, when a campaign is implemented with the best solutions, it’s impossible not to attract the attention of shoppers and other possible customers.

Tokinomo is not just a simple in-store marketing robot, it is a new medium! This innovative solution helps FMCG brands and retailers attract customers in brick and mortar stores, but it also helps campaigns go viral because of its innovative technology. People are intrigued by this new technology and that’s why Tokinomo can help brands go from the shelves to social media with a simple share.

Ready to make your product attract attention in-store and go viral on social media? Drop us a line!

Sign up for news alerts, insights, and teachings!
See more by tag
Featured
Rise in inflation influencing grocery advertising
Shopper Marketing Weekly Snacks #13
Rainbow washing: What is it and why it needs to stop
Shopper Marketing Weekly Snacks #12
How to make your store more Instagramable with visual merchandising
Tweets by Tokinomo
Article Tags
Show your support
Prev

Expert round-up: The state of in-store marketing in 2021

A lot of events have happened in the last two years and most of them had an impact on the retail industry. The COVID-19 ...
Read More

Campaign scoop Saving up. Prices have gone up on almost everything, including gas. Carpooling, choosing public transport...
Read More

Rainbow washing: What is it and why it needs to stop

It’s almost the end of June and the world seems to be filled with rainbow-colored flags. The retail industry is no stran...
Read More